How Machine Learning is Breaking Boundaries in Surprising Industries

A world run by smart robots and artificial intelligence has long been the stuff of science fiction fantasy. However, truth is sometimes stranger than fiction. Recently, Scientific American magazine reported that scientists have come closer to achieving ‘direct brain to brain communication’, connecting a network of human minds to create an internet of brains. This could form the basis for smarter and faster ways for people to work together and solve problems.

We are not yet at the stage of an “internet of minds”. However, artificial intelligence has been making strides ever since it was first conceived as a modern concept in 1956. Today, AI is not just a far-off goal or fantasy. AI, or machine learning, is incorporated in our lives in ever more new and exciting ways.

Here are a few examples of surprising ways that machine learning is breaking through to different areas of our world.

It is easy to imagine how computers can conduct complex calculations and analyses. But how about analyzing emotions and feelings? Artificial intelligence is now being used for Sentiment Analysis, in an attempt to better understand and interpret human emotion via AI-based computerization. Grammarly, the popular writing assistant app, recently launched the beta version of its new tone analysis feature. Using machine learning, the app scans a piece of text and measures its tone and mood. For example, it can analyze whether a text piece is communicating a casual, formal, angry, enthusiastic or grateful tone. The tool asks users to rate the accuracy of their assessment, meaning it is getting smarter and more accurate over time.

Scientists have been working on an AI-based methodology to see if they can assess a link between psychopathy and a person’s Twitter feed. Machine learning can be used to detect patterns in language and communication that are strong indicators of psychopathic tendencies. Controversial? Perhaps. Fascinating? Definitely!

How about assessing the flight risk of alleged criminals? Scientists have developed an algorithm that can help detect the risk of allowing an alleged criminal to remain at home during a trial versus incarcerating them, which is an expensive and resource-heavy option. The results of the algorithm’s assessment were even found to be more accurate than the assessment of experienced judges in a number of cases. Is AI the future of the court system? Not in the near future, but perhaps one day...

Could AI ever replace your financial advisor? After all, financial decisions are not just pure mathematics - they tend to involve human emotions, values, and relationships too. AI is on its way to becoming a tool to dispense financial advice, such as when to pay off a mortgage, or save and invest, which pensions are the best for the individual, and other personal finance considerations and decisions.

However, not everyone believes that computers can replace humans when it comes to financial and investment decisions. As one behavioral expert points out, personal finance is a journey without a definite endpoint - there is not necessarily a right or wrong ‘ending’. Machine learning may be starting to become helpful in determining the tone of an email text, but it is not yet at the advanced point of being able to detect and manage complex emotion-based financial decisions. Although we’re not quite there, with the rapid advancement of machine learning, AI-based financial advisor tools may well be part of our future.

So you’ve heard of the Internet of Things, but how about the IoMT - the Internet of Medical Things? Medicine and healthcare are advancing rapidly in the use of machine learning, AI and robotics, from early detection of disease via wearable tech designed to monitor body functioning, and consumer health applications used by people to help track their lifestyle and health choices. Machine learning is all about identifying and understanding patterns, and building algorithms around those patterns. The more ‘learning’ the device does (ie. the more data it analyzes), the more intelligent and better equipped it will be to accurately analyze the data.

IBM Watson Health, for example, is using AI to review and store medical information from journals, case studies and treatment studies all over the world, compiling a vast store of mineable data far more rapidly than could ever be possible with human effort alone. And as the population lives longer, AI is being combined with robotics to provide an option for end-of-life care. This could reduce the need for hospitalization and enable people to stay at home for longer.

When Sarine launched its Sarine Clarity™ and Sarine Color™ AI-based diamond grading devices in 2016, it was the launch of a new era in the grading of diamonds. Diamond grading has traditionally been a manual profession, relying on the expert eye of the gemologist to asses a diamond’s clarity and color grading. However, diamond grading is fraught with inconsistency, due to the subjective nature of human perception. In recent years, AI-based diamond grading, now offered at Sarine Technology Labs in India and Israel, has been opening up a new perception in the way that diamonds should be graded, and in the level of repeatability, objectivity and accuracy that is necessary to ensure consumer confidence in the diamond industry.

From the law courts to the medical clinic and diamond lab, machine learning is paving the way to a future that we cannot just imagine but can actually touch. 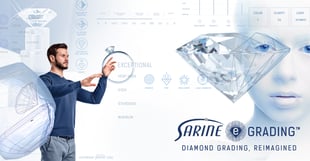 As the world becomes more automated and digital, diamond grading is not left behind. From rough to cut, the use of technology in grading and traceability reports is the direction the industry is headed. As pioneers in diamond technology, and the.[...] The fashion industry has a problem, and it’s called sustainability.

Fashion is a truly global and complex industry, connecting raw materials suppliers, manufacturers, brands and consumers in every corner of the world. It’s also a massive one,.[...]